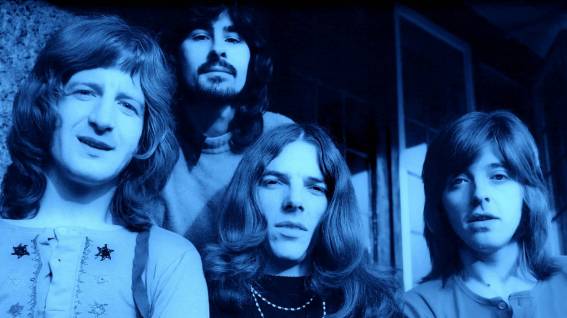 By Taylor MacHenry (aka Charles Henderson)

A song came in my head this morning while I set water at a slow trickle on my red apple tree. Baby Blue, a melody by Badfinger, a worldwide hit in 1971.

Hearing the guitar riff play in my mind, so catchy, I began to recall those days when I served in the Far East, a young United States Marine who had risen to sergeant and was surrounded by the best men I have ever known, or perhaps will ever know. Men who were boys then, but did the work of men, and had pure hearts and high ideals.

Corporal Doug Bricco could play the guitar and sing too. He could pull off that Badfinger riff from Baby Blue and sound just like the recording. Doug, big and muscular, was a studious type, gold rim glasses and a black moustache, regulation, of course. But he was a lot smarter than most of us. A young man with a beautiful mind, and talents to match. He would go far, if he lived past the present days.

Then Corporal Carl Hebert, a coonass from New Orleans. What a piece of work! Filled with jokes and sweetness. I don’t think Carl ever stopped smiling, even when he followed Lieutenant Colonel Ray Porter and his battalion of Marines onto Koh Tang Island and engaged Pol Pot’s Khmer Rouge forces that had kidnapped the American cargo ship, Mayaguez.

There was a certain goodness that hides deep in my heart from the Viet Nam War era. Not the war itself but from that time: The closeness to each other that we felt, we who were mere boys then and put on the uniforms of men and became men.

We were innocent in those days, like America, like everyone in the Land of the Free. Driven by idealism based on goodness and ethics and decency, driven by a love for God and for our country.

Our fathers had, like us, become men in battle. World War II and Korea. I recall as a child in Artesia, New Mexico the hometown boys in uniform, olive green and shined boots, helmets on their heads and M-1 rifles on their shoulders, marching down Main Street, our National Guardsmen home from Korea. Boys who became men, enduring horrors that words cannot describe, yet still holding onto the promises and the innocence of America then, 1953.

Ten years later, things would change. Innocence and decency, purity and honor fell under attack, led by ruthless cowards who saw an opportunity to make money and perhaps train the forces in some real-time combat. They didn’t take Ho Chi Minh and Vo Nguyen Giap seriously.

The French were sissies, after all. Got beat at Dien Bien Phu by a bunch of rice farmers with worn-out guns. They branded the French ineffective fighters for how they rolled over to the Germans in World War II and Charles de Gaulle ran for cover, leaving his nation unguarded. They didn’t stop to consider that General de Gaulle had remained in the weeds, hidden with the French Resistance and led them in a continued fight against the German forces that occupied France. And those rice farmers in Viet Nam fought for a cause alongside well-trained soldiers who had not stopped waging battles since they fought the Japanese in World War II.

America stepped in where the French had failed, ten years earlier at Dien Bien Phu, believing the ideals of Superman—no one can beat us. We were innocent and pure in mind and heart. Our nation’s political leaders weren’t, but we were. And we believed. Because innocent America had raised us. We had goodness in us, running through and through. We came to help a beleaguered people of South Viet Nam, honestly. We did. Honestly. And we died there, physically and emotionally.

The crooks pulling the strings and making money hand over fist did not believe in anything except their richness. They could not care less for America’s children sent to die in a war we did not understand. To this day we still do not understand.

We came home from that war changed. Changed just like America. The goodness became cynicism, mistrust of authority and openly angry objection. We can blame our change as angry men on PTSD, the trauma of war. An easy cop out, but there’s much more to it than simply PTSD. Those of us who saw additional war and more horror after Viet Nam have the memories and struggles and flashbacks of our service stacked atop itself. Most veterans from my time and today’s wars cope, but too many among us simply and finally give up, put a gun to their heads and pull the trigger. We look forward to rest at last from the darkness that overwhelmed us. That took our innocence.

We who remain to fight on miss that innocence and goodness, and the love. We loved America then, and we loved God much more. We loved our families and loved the ideals taught to us at Hermosa Elementary School in Artesia, New Mexico in 1954. And in 1966 when we graduated high school and marched to war in Viet Nam.

We miss the time in this nation when even in New York City the high school boys had shooting clubs and took guns to school. At my high school, we kept them loaded on racks in the back windows of our pickup trucks, parked out front, on the street, unlocked. Not to use to commit violence or terrify anyone, but because guns were a part of who we were as Americans, innocent and pure hearted in our ideals. Guns in America were for sport and pleasure.

They were part of something even much larger: Our liberty. Our decency. The goodness that America was in those difficult years. And during those years, our innocence died.

No, we were not perfect. Far from it! Racial inequality loomed large and shameful, and directly opposed our true American idealism that said God created all of mankind equal and required equal justice and opportunity.

Today, as a nation, we have become bitter and angry. Racism seems to have grown worse, not better with what should be enlightened understanding. We have become selfish like the bastards who led America to war so long ago. Guns mean violence today, and hate stands at every corner. Blame and hatred and loudmouthed condemnation from every side. Ugliness thrives where beauty once lived. Innocence and decency slain by the devil himself, it seems.

Baby Blue begins with, “Guess I got what I deserve… Left you waiting there too long, my love… All that time, without a word… Didn’t know you’d think that I’d forget… or I’d regret… The special love I have for you… My baby blue….”

I can still hear Doug Bricco singing it. His guitar in perfect sync and tune. Boys in the barracks, waiting for battle, to do the work of harsh men. And my heart aches, because I too miss the innocence of that day. I miss the sweetness. The purity of our idealism. And most of all, I miss the love.