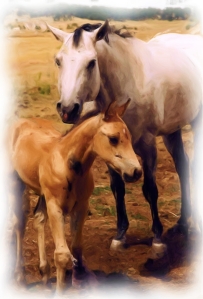 I was lamenting the high cost of feeding and keeping horses this morning. Looking to sell some mares. Bring down my hay bill. With no rain for so long here in eastern El Paso County, Colorado, the pastures all but went dead. Might as well be the middle of winter. Nothing green. Everything dry and brick hard. Ugly. Then after half the world burned down in Colorado Springs, and all the land here turned brown and yellow, we finally have some rain. The rain may or may not bring back grass this summer. We wil keep praying.

So with hay here on the Colorado Front Range now at $0.18 cents a pound and rising, despite the harvest of new grass now coming in, (yes that is $360.00 per ton for hay that should be $90.00 per ton, or less than a nickel a pound), we have to cut the herd. We already cut our own groceries to allow for money to buy hay. We cannot live on air, and neither can the horses.

I called Doug Johnson, the man who trains, rides and competes in the PRCA on my AQHA registered tie-down calf roping stallion, Explosive Doc King, talking to him about selling some of these horses, and giving him first bid on the best ones. And that’s when Doug told me something that made me choke up and fill my eyes with tears. My heart is still aching. I know exactly how this man feels. I know his anguish. I know his love for his horses. I know his desperation too.

Here in El Paso County Colorado, the sheriff’s department cruises around the places where people own horses and look for thin and underfed horses. When they find some showing ribs, they warn the owners that they will be fined if they do not fatten up the horses. That’s why we, like many other horse ranchers, feed our horses while we, ourselves, will go hungry to do it.

A horse rancher, a good, God-fearing man and his wife, have done all they can to survive nearly 10 years of severe depression in the horse business. It used to be a good business, raising and selling high quality horses. But today, you can’t give away a lot of horses. In fact, my pastor, Dave Shumpert, at Cowboy Church of Peyton, had a man stop him in Falcon, while fueling the church carry-all van, and ask if he knew anyone who wanted horses, for free. The man was trying to give his herd away, and had no luck even giving away good horses.

So, this rancher and his wife are hanging on by their fingernails, unable to pay the astronomically high hay and feed prices, and are literally stuck with about 30 head of hungry horses to keep fed. Hay prices went up with the drouths, and the high cost of diesel, and the sale of hay and small grains to China, and the government dictating ethanol as a fuel. High prices for feed and hay are here to stay. With the bad economy, most people who used to buy horses quit buying them. Restrictive federal and state laws then drove the final nails in the coffin of the horse industry. So, today, only rich people and fools have horses. I’m a fool, hardly rich. And times have got awfully hard with a feed bill well over $1,000.00 per month.

This horse rancher I’m telling about has three times more horses than I do, so his feed bill is at least $3,000.00 per month. That’s just feed, not veterinary costs or the other expenses that also make keeping horses foolishly high.

The El Paso County Sheriff’s deputy in this horse rancher’s corner of eastern El Paso County stopped by their place and warned them that their horses are too thin. If they didn’t get the horses fattened up they will have to start paying fines. They could even be criminally charged for animal abuse. People who live in Colorado Springs and drive in the country now and then are upset at seeing a thin horse on a barren pasture. With no rain, pastures are barren and horses are thin. But that does not register. What does register in the well-meaning minds of the city people is that what they see appears to be animal abuse. They want that bum who committed this crime put in jail.

This horse rancher and his wife had raised most of their herd of thirty-odd horses from babies, born on their ranch. They hand raised the colts and trained them to ride. It used to be a good business until the federal laws were passed that killed the horse business in the USA. Now, horse ranchers struggle to survive. You can’t feed them and you can’t sell them unless you spend $2,000.00 training the horse that you end up selling for $750.00 to $1,000.00, if it is a good one. Many ranchers like this man have gone under.

This rancher and his wife, like most people who raise horses, love them a little too much. Horses have strong personalities, much like a pet dog, and are very smart animals, aware of who they are and who the people are. And like an elephant, a horse never forgets. They are very easy to love. And that is a problem.

That’s why this story is so heartbreaking. Unable to sell any horses, and unable to feed their horses because of high hay prices and no pastures because of the severe lack of rain we have had: Horses that they raised from babies. Horses that they fed what they could afford, and the people themselves did without food on their own table. Horses that these people sacrificed for, raised and loved. And facing fines and possible criminal charges. And they can’t even give away the horses. The man and his wife were left with only one option. They had to put down these animals that they love. At this point of final desperation, they have to kill their horses.

The rancher called Doug and asked him to dig a couple of trenches, deep enough to bury the horses. Doug took his heavy earth-moving equipment over to the man’s ranch and dug the long pits. Then while the good rancher went to work, Doug had to turn his back to it. He couldn’t watch. Nobody could. It’s just too hard to see.

First day the man managed to kill nine of his herd. Shot them in the head and Doug buried them. Next day, the man had eleven more lined up, ready to shoot between the eyes, one at a time. He shot the mother mare first. Then he shot the filly standing by her. Next, the three year old gelding that he had raised on a bottle and trained by hand. That’s when the man fell to his knees, unable to continue. Emotionally crushed. He could not do any more. The heartbreak was just too much.

People who live in the city and pass judgment on the horse world, making their couch-side demands while watching the PETA stories on TV, need to know the reality that today overwhelms most of us who raise and keep horses.

We who love and breed and raise and keep and train horses, hoping to sell some good ones for at least a reasonable price, maybe come close to break-even, regard these animals as among the most noble of all of God’s creatures. In the Book of Revelation in The New Testament of the Holy Bible, the Apostile John describes Jesus mounted on a white horse, and His Angels mounted on horses too. Yes, according to the Holy Bible, God’s Holy Word, horses are in Heaven.

Horses deserve our best. They give us their best. It is a terrible sin to mistreat them, or abuse them. Thus, in keeping with God’s ethic of the Good Shepherd, we give our horses our best. And sometimes it’s just not enough. So we are forced to do the most horrible thing we can imagine, and we kill our horses. Because we love them, and the laws and unknowing people who live in the city have no mercy for us.

Also deserving our best are the poor struggling horse ranchers who love their horses and find themselves forced into shooting them in the head. These people who love their horses also deserve our love too. They need our help! They do not want to kill the horses, but what else can they do? The law is the law, and people watching the TV news must feel satisfied. Meantime, the emotional damage the horse ranchers suffer from it will scar their souls for the rest of their lives.

We all love horses, but we also need to love the people tied to them too.

One thought on “Killing Our Horses and Ourselves”